Just added to your cart

Comosystems has over 10 years of high level research and development that resulted in Compensating Magnetic Oscillator technology.  With his background in Pharmaceutical development, founder, Maurice Fillion-Robin knew that the new technology would not be credible or taken seriously unless it was tested under controlled laboratory conditions initially, and later in the field under real life conditions.  He also knew that in-house research would be viewed with suspicion and would not be considered credible either.  Various different scientists in different fields and in different universities and research establishments around the World performed rigorous testing procedures that were written up before being peer-reviewed and published. No other product in this market has been tested and proven over so many different biological markers and parameters as CMO.

Research is ongoing to ensure that CMO technology is as effective today with the rapidly expanding EMF networks and frequencies as it was when it was first marketed.  Comosystems can therefore say with confidence that CMO technology is able to mitigate for the range of existing EMFs commonly found in the home, the office and out and about in towns and cities etc. 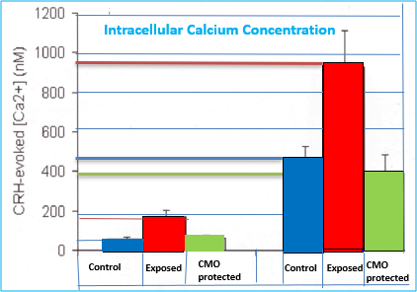 The results displayed in the graph above were obtained by Dr. Govindan DAYANITHI at Université de Montpellier

Both Dr Andrew Goldsworthy of Imperial College London and Prof Martin Pall of Washington State University have independently confirmed that EMFs interfere with Voltage Gated Calcium Channels, enabling an influx of Calcium ions into the cell which initiates an inflammatory cascade.

Symptoms of EMS sensitivity can be eradicated by using Calcium Channel blocker pharmaceutical drugs, which confirms the adverse effect on calcium ions by EMFs.

The optimization and normalization of the calcium fluxes into the cell is obtained by means of the CMO targeting voltage-gated ion channels in cooperation with intrinsic stochastic resonance.

This normalization results in the improvement or disappearance of the symptoms listed below: 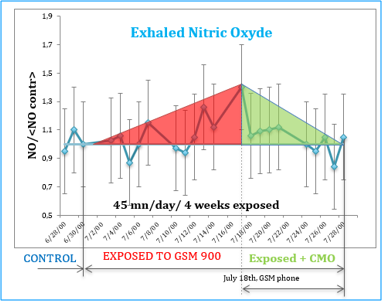 Nitric oxide (NO) is a free radical that attacks all cellular structures. Increased NO levels indicate higher cellular stress

Normalization of NO levels using CMO results in the improvement or disappearance of the symptoms listed below:

Implications of normalised NO with CMO 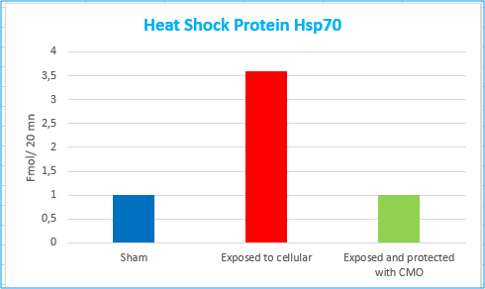 The results displayed in the graph above were obtained by Prof. Reba Goodman, Columbia University, New York, USA

Hsp70  is a stress-induced protein. High levels can be produced by cells in response to hyperthermia, oxidative stress, and changes in pH. In this experiment, exposure to EMFs from a mobile phone increased Hsp70 levels approximately 3.6 times base level.

Protein misfolding is believed to be one the primary causes of:

Normalisation of Hsp70 by CMO results in the benefits listed below: 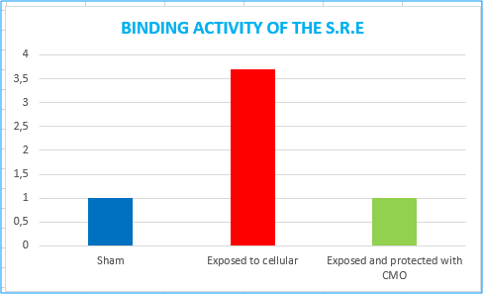 The results displayed in the graph above were obtained by Prof. Reba Goodman, Columbia University, New York, USA

SRE is involved in gene transcription and cell signalling associated with growth and cell replication. In this experiment, exposure to EMFs from a mobile phone increased SRE levels approximately 3.7 times base level.

Disruption of normal SRE function can result in:

Normalisation of SRE by CMO results in the benefits listed below: 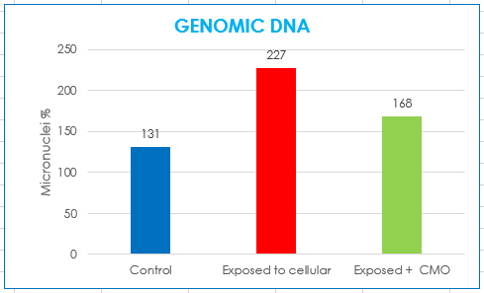 The results displayed in the graph above were obtained by Dr Youbicier-Simo B-J. (Tecnolab), Dr Fernandez A. (CNRS, Univ. Montpellier)

Disruption of normal SRE function can result in:

CMO reduces the damage to gDNA by about 39% thereby providing some but not total protection: 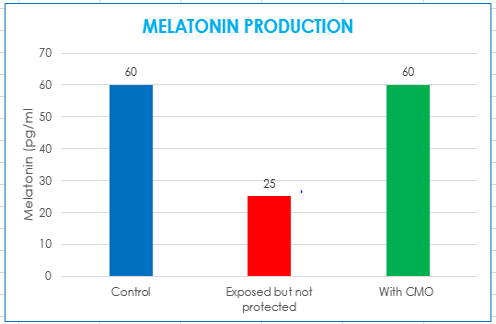 Melatonin is a hormone and an anti-oxidant that synchronizes and stabilizes bodily rhythms including, but not limited to sleep, although this is its best known function.  Low melatonin levels reduce sleep. Its synthesis occurs in various locations throughout the body, including the pineal gland, skin, lymphocytes and gastrointestinal tract (GIT). Synthesis and secretion is controlled by light and dark conditions, whereby light decreases and darkness increases its production. Melatonin links into other hormonal systems too, allowing some species' sexual behaviour to be manipulated through lighting regimes.
Melatonin and melatonin receptors are important because of their role in the management of depression, insomnia, epilepsy, Alzheimer's disease (AD), diabetes, obesity, alopecia, migraine, cancer, and immune and cardiac disorders.

Reduction of normal melatonin can result in: 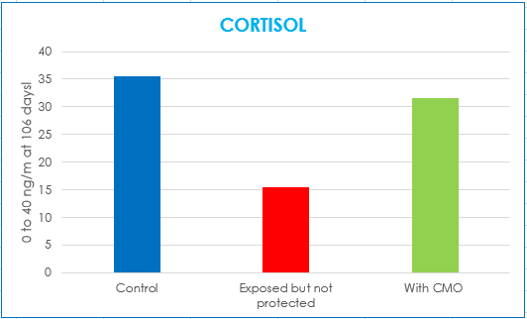 The results displayed in the graph above were obtained by Prof L. Bonhomme-Faivre,Laboratoire de Pharmacologie, Hôpital Paul Brousse, Paris

Cortisol is a glucocorticoid steroid hormone that regulates a wide range of processes throughout the body, including metabolism and the immune response. It also has a very important role in helping the body respond to stress. Think of it as your built-in alarm system!
It is controlled by the Hypothalamus-Pituitary-Adrenal axis as below 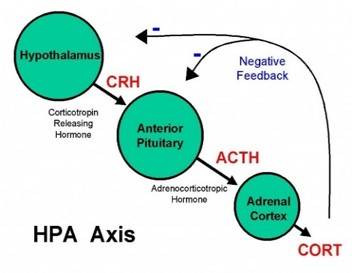 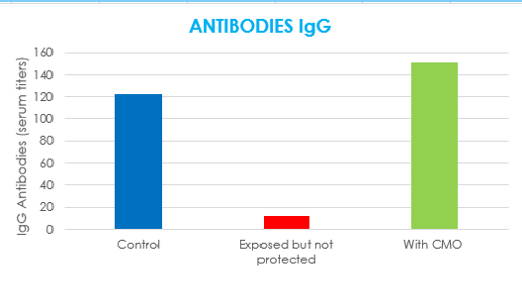 Immunoglobulin G (IgG) is a type of protein antibody. Making up approx 75% of serum antibodies in humans, IgG is the most common type of antibody found in normal blood circulation. IgG molecules are created and released by plasma B cells and are found in all body fluids to protect against bacterial and viral infections.  Levels of IgG are a good indicator of immune function.

Reduced levels of IgG can result in: 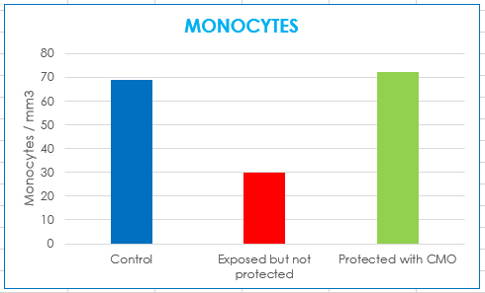 The results displayed in the graph above were obtained by Prof L. Bonhomme-Faivre, Laboratoire de Pharmacologie, Hopital Paul Brousse, Paris

Monocytes are the largest type type of leukocyte, aka white blood cell (WBC). They can differentiate into macrophages and myeloid lineage dendritic cells.  Macrophages are the non-specific first line of defence for the body and surround and kill microorganisms, ingest foreign material and cancer cells, remove dead cells, and boost immune responses. Monocytes and monocyte-derived macrophages play a crucial beneficial role in the regression of liver fibrosis, muscle regeneration, and the clearance of the β-amyloid plaques in Alzheimer’s Disease.
Levels of monocytes within a WBC count are a commonly used diagnostic indicator of immune function.

Reduced levels of monocytes can result in: 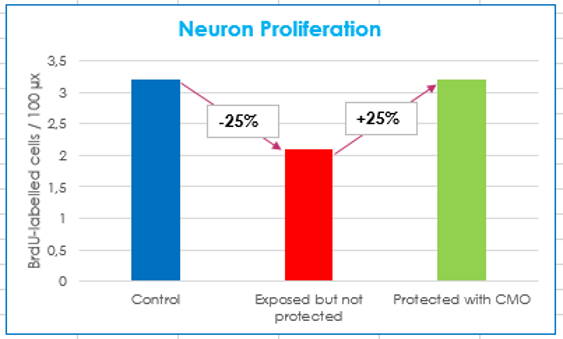 The results displayed in the graph above were obtained by Dr B-J Youbicier-Simo, Tecnolab, France looking at neurons within the brain Hippocampus.

Neuron (nerve) proliferation occurs much further into our lives than was thought until quite recently.  Repair is ongoing.  The brain is very much more plastic and adaptive than originally thought.  The Hippocampus is located deep in the temporal lobe of each cerebral cortex of the brain. It is an important part of the limbic system, a cortical region that regulates motivation, emotion, learning, and memory.
Those with Alzheimer's and other neurodegenerative dementias lose neurons faster within their Hippocampus.

Reduced levels of neurons can result in:

The results displayed in the graph above were obtained by Prof M. Bastide, Dr B-J Youbicier-Simo, Pr Y. Grigoriev

It should be noted that the results graph above include a result that most people would not have expected. The yellow bar in the last group of results showed that shielding from all EMFs with a Faraday cage-like arrangement actually increased embryonic mortality. This is because it cut out those natural EMFs that life on earth evolved to live within and that have beneficial effects on our biology. This is a good example of why it is important to have biological proof of efficacy when using EMF protection. Something that sounds like it might reasonably have a beneficial effect may in fact do the opposite, however well-intentioned.

Infertility amongst the younger generations has been rising rapidly and most notably in countries that typically use high levels of technology that rely on and emit EMFs. Singapore had a 31% drop in reproduction between 2016 and 2017 at the same time that Macao had a 26% drop. South Korea dropped 11% at the same time and a further 9% drop in the 1st half of 2018.

European studies give rise for even greater concern. Two studies published in 2018 showed that in Finland and Denmark 78.5% and 79% of males respectively are either in the low fertility or infertile ranges. This was supported in 2019 when a study from Switzerland showed that 62% of young males are infertile.

When the average cost of private infertility treatment in the UK is as much as £5,000+ per cycle with only 29% average success rate for women under 35*, the message couldn't be any clearer - avoid all EMFs as much as possible, don't carry mobile phones in trouser pockets when switched on especially and our advice is to use CMO technology to cover all other exposures. (*Source: NHS website) 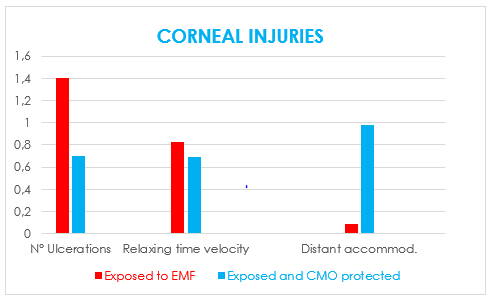 The results displayed in the graph above were obtained by Prof. M. Miyata, Tokyo Univ. Japan 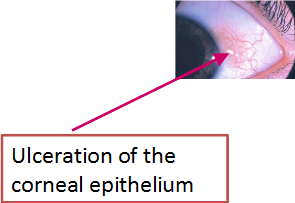 Stress in the Work Place 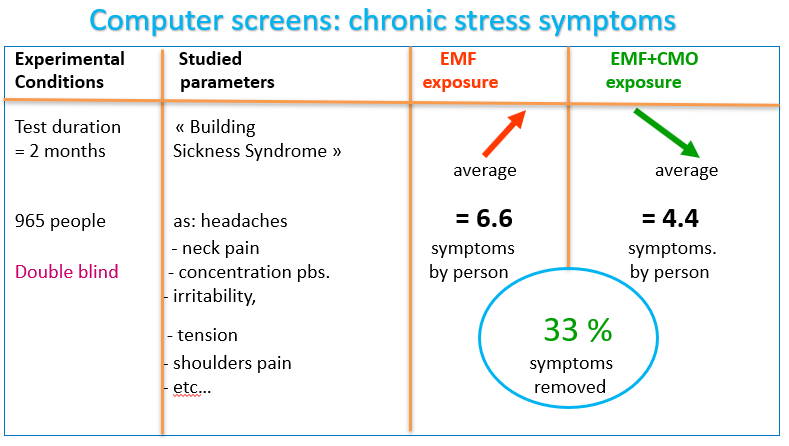 The results displayed in the graph above were obtained by Jukes Associate Ergonomic & Environmental Consultants/Tecnolab, overseen by Reading University. 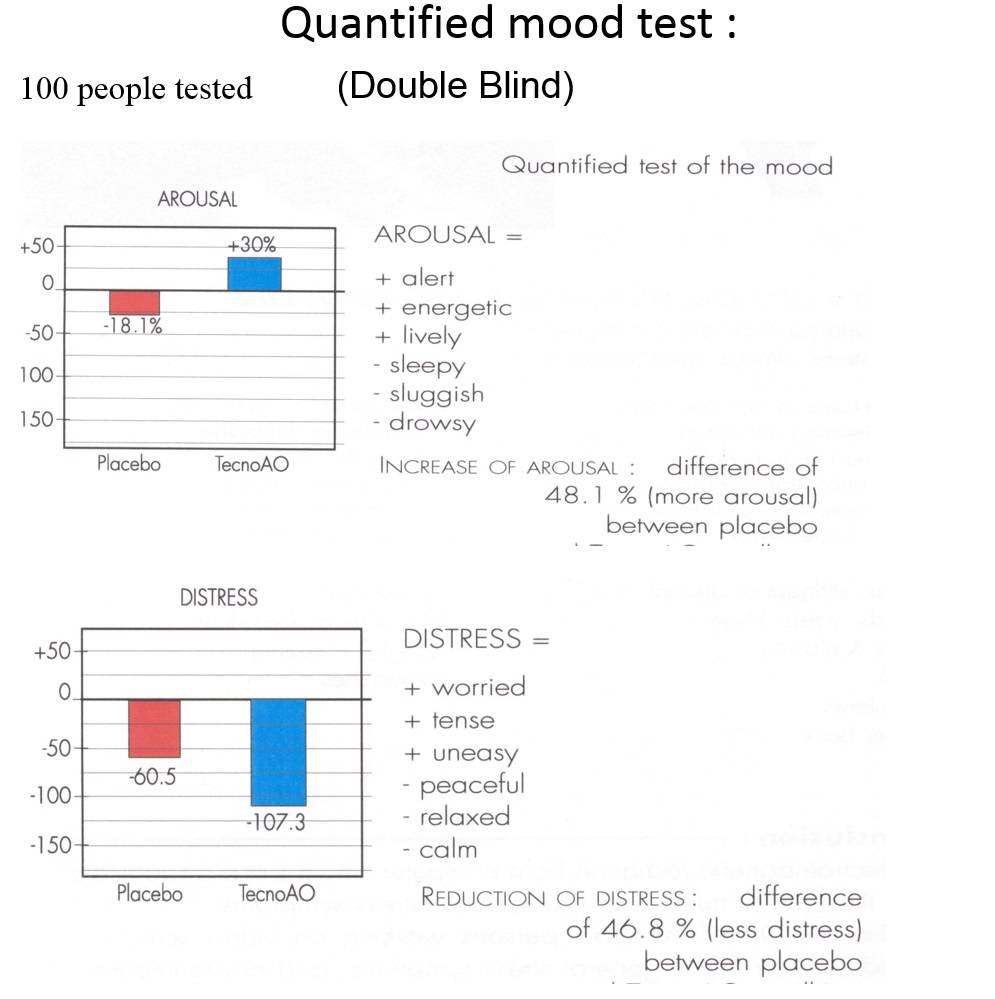 The results displayed above were obtained by Prof. T. Canavan Luton Univ. UK 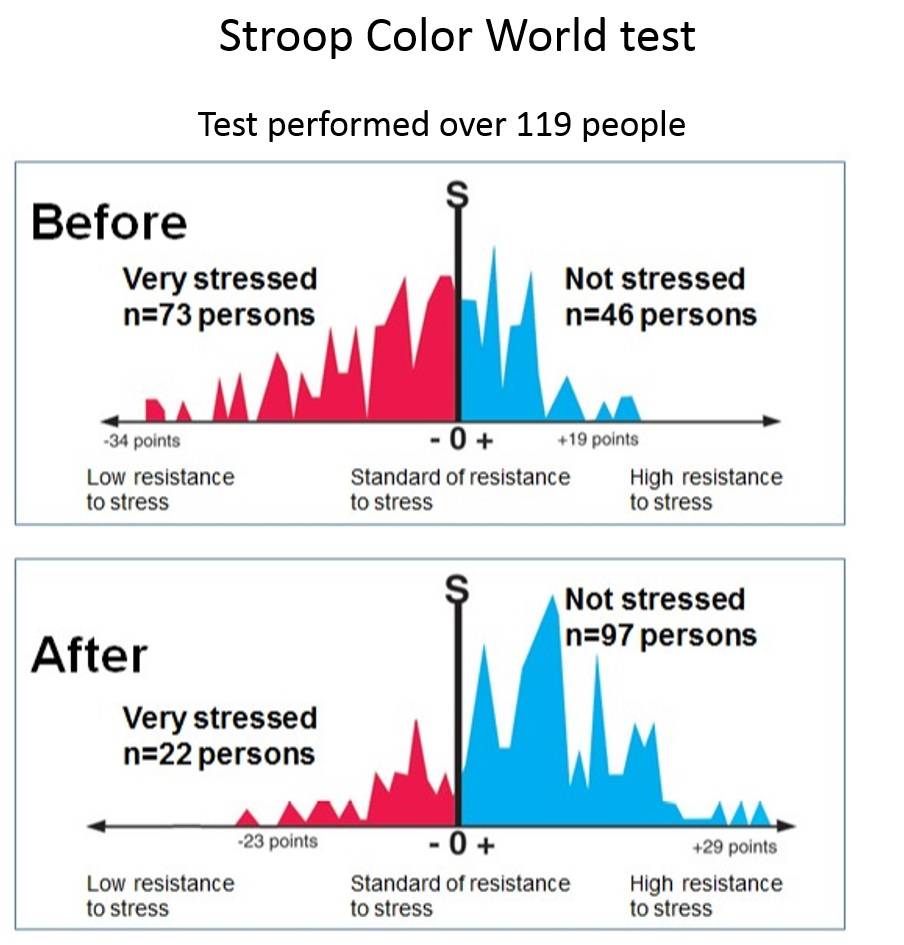 The top graph measured the base rate of stress in people who were regularly exposed to EMFs. The second graph below was obtained after using CMO technology for the interceding month. Given that not all stress can be attributed to EMFs, it is suggestive that the beneficial effects of CMO as demonstrated by the individual marker graphs above may also mitigate for other unidentified sources of stress that can disrupt cortisol, voltage-gated ion channels such as Calcium, Hsp70 etc.